I woke up early with almost no sleep. I’m still tired of the trip, but the excitement is bigger. I get dressed and walk down the wet pathway to the reception building. They take me through a spacious courtyard to the dining area, in front of which I am greeted by three unexpected hosts: a small thin-legged animal slightly larger than a rabbit, a kind of gazelle similar to a baby deer, and a funny long-legged bird like a heron, but much more exotic. They kindly pose to me, accustomed to human attention. I am delighted with their presence. They look like three aliens to me. A banana tree, with many small fruits, and a tall coconut palm, with numerous nuts, grow across the path. The real African fauna and flora.

The dining room is spacious. It has almost more staff than guests. A breakfast buffet is set up. I take fresh fruits: pineapple, papaya and watermelon. Pineapple is very tasty, watermelon and papaya are not. It’s a pity they don’t have mangoes, but its season starts in April. I sit alone at the table and look around. The building has a high wooden structure, it is glazed, and most of the windows are wide open. The inventory is simple, mostly wooden. The kitchen is under the same roof, right next to the dining area. There are paintings and sculptures with African motifs on the walls. The interior is nice, but my eye is caught by the dilapidation and dirt of most things: the floor, chairs, tablecloths, plates, glasses, even the cutlery. I approach the table with more explicit food and open a plastic container that covers some fried sausages. The lid of the container was broken off and unsuccessfully repaired. Two possibilities come to mind. First: dishes are inaccessible or expensive, and second: the way of thinking is such that no one, not even in a hotel, bothers with trivialities such as dishware. I hope to find the answer in the coming days. I finish my breakfast and pour myself a cup of coffee. Terrible watery filter coffee that I drink only when there is no other. Smoking is not allowed, and ban signs are displayed on all tables.

Entrance gate of the hotel

I’m heading for my room. It was agreed that I should be ready at 12 o’clock. Walking towards the Blue Front building, my view turns to the entrance gate of the Hotel yard next to the reception. I see the ocean, from which only a street separates me. I’m heading for the gate. The guards open the door for me. In just a few steps, I cross Lumley Beach Road and reach a spacious tropical beach on the Atlantic coast. My first daily encounter with the vastness of the ocean. So far, I have only been to the narrow seas of the Mediterranean. The beach is sandy and huge. It stretches for miles. The sky and the ocean merge in the distance. What a space, what a view. I am suddenly overwhelmed by some loveliness. I forget about my tiredness. I feel relaxed. I forget what was and what should be. The burden of stress and responsibilities falls from my shoulders. I’m just now and just here. 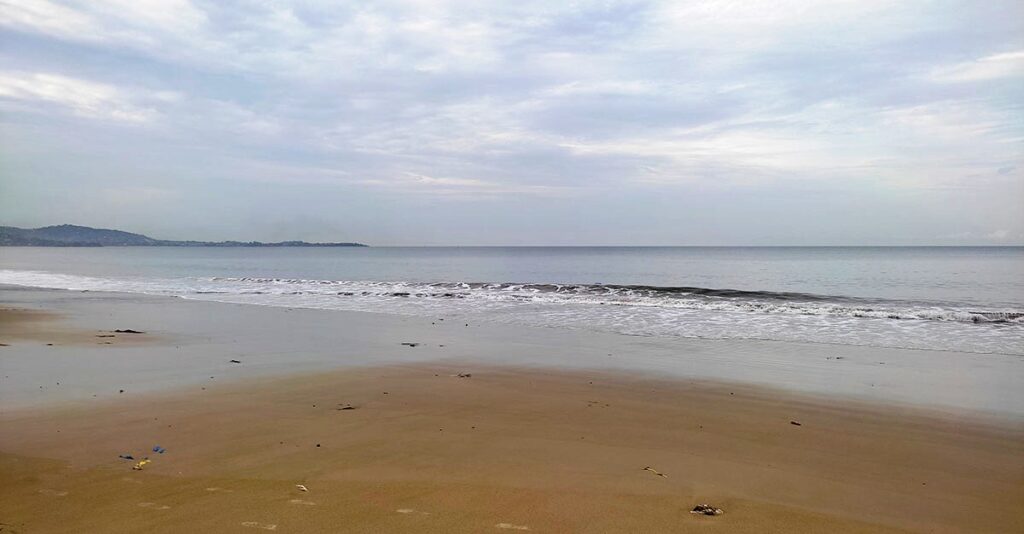 The vastness of the Atlantic ocean

I stay on the beach for some unknown time staring at the waves and the distance. I capture a couple of photos, to send it to my kids who are in three different countries of the old continent. Each in his own and each in the other: Austria, Bosnia and Herzegovina, Serbia. The winter starts there, and here it is 30 degrees, 24 hours a day, 12 months a year. Eternal young summer. There are no seasons. Just the dry and rainy one, which is just about to set. I turn towards the Hotel and look in the direction of the City. For the first time, I see the outlines of the Lion Mountain. I was told how the whole country got its name by mistake. When the Portuguese landed free slaves in this place, the thunder of a tropical storm was heard from the sea, which spread over the hills where Freetown lies today. Uninformed, they thought it was the roar of lions, and so they called the place and the country Sierra Leone. There are no lions today, unless one wanders from Liberia, while the roar of tropical storms still occasionally echoes through the landscape. I would love to hear it at least once. And, it is not just the name of the country given by mistake; the history that does not begin with the arrival of the colonizers, as someone insufficiently critical can read and think, but goes back into many millennia, is also wrongly written. It is the time for this Country to snap out and reassemble, and for its people to correct and rewrite the old and thus trace the path of their new and own history. I will try to help them as much as I can.

Slopes of the Lion Mountain

The noise from the road awakened me. A mass of people and vehicles that are constantly honking. Here, the siren is definitely a very useful device. It is as if they are imitating Morse code with a sound, warning other traffic participants of their presence and their movement. The beeping is brought to virtuosity. Unburdened and refreshed, I head for the hotel room. Today, I should hold several internal meetings with colleagues from the office. On the program, I first have a short courtesy meeting with the country director, and then two more meetings with colleagues working on complementary projects. There is, of course, the inevitable security briefing, which, in addition to talking to a colleague and a kind of host – Bockarie, a local person engaged in the project, should fill-in my working day. Other meetings begin after the weekend and last throughout the week. My task is to present the possibilities of projects co-financing to local companies and institutions, as well as to introduce my new colleague Bockarie to the story of development partnerships financed by the German Government. I already did that in the Balkans and Eastern Europe, but things could look a bit different here. We’ll see.