It’s late afternoon. Ginny drives me to the hotel, and Bockarie keeps us company, summing up the working day along the way. I suggest we go for a drink. We stop at Lumley Road, in front of a beach bar named Cuba. The bar is outdoors. Simple inventory. Several canopies with plastic and tin roofs resting on wooden beams driven into the sand, something like a bar, with a barbecue in the background, and an ancient billiard table with several guys gathered around it. I notice they play badly. The plastic tables and chairs are slightly sunk into the soft sandy surface. On one side is the street, on the other the beach and the ocean. Bockarie and I sit at the table closest to the beach, while Ginny orders a drink and returns to the vehicle, which may not be left unattended. My enthusiasm for the ocean and the beach from this morning does not decline. The environment in which I find myself is quite different from the enclosed spaces and limited gardens common in the part of the world I come from. The sun is still strong and high above the sea, but in some unusual way it does not burn on the skin as in my parallel. At Bockarie’s suggestion, I order Guinness, which is produced in a local brewery.

A view to Lumley beach

It amazes me that there are so few people on the beach. There are almost no bathers, and those who bathe do not swim and enter the sea just enough to get wet. I ask Bockarie why it is so. Jokingly, he tells me that Africans are afraid of natural waters, because demons live in them. He says that they were taught so from an early age and that his father forbade him to bathe in natural streams and rivers as a boy. Maybe that’s why Africans are not good swimmers. They have proven themselves in many others, but not in water sports. I tell him how my kids learned to swim before they started with school and I brag about how the best water polo is played right in my part of the world. He is familiar with this sport, but it seems bit unusual for him to hear that someone is following it. Africans, like Europeans, are preoccupied with football. Many African players play in European leagues, which are watched at every step. During the day we passed by Siaka Stevens Stadium. I asked Bockarie if the stadium was named after one of their famous football players. He replied with a smile that Mr. Stevens was not a famous football player, but a former prime minister and president in whose mandate the National Stadium was built.

Rare bathers at the beach

As we talk, I notice that I am the only white man in the garden of the beach bar. Beggars and numerous street dealers notice that as well, approach our table every few minutes, both from the street and from the beach, and ask, offer and sell somewhat. From one of them, I buy an excellent gold Marlboro made in Senegal at a price of 15,000 Leone or a little more than one euro. Bockarie told me that they also had a local tobacco factory, but that it was closed, like many other companies. The only serious work in the country is done by multinational companies that are mainly engaged in the exploitation of mineral resources – diamonds, rutile, bauxite, gold, iron and platinum. For decades, the old colonial friends have successfully maintained their influence in activities based on the exploitation of ores: Americans, British, Dutch… Besides ores, coconut flour is the only serious export product. A good part of the economic flows are held by the Lebanese, who began to immigrate intensively during the war in Beirut, and the people in Freetown perceive them almost as domestic. Today, numerous Indians and omnipresent Chinese are joining them, finding their ways to take over work, primarily in transport, construction and infrastructure. With the exception of the Lebanese, it is clear that neo-colonialism is still present in the Land of the Lion Mountain; it only takes on new and more sophisticated forms.

Firms owned by local residents are mostly small, entrepreneurial. They serve the needs of multinational companies, as well as the basic needs of the local population, barely surviving. They are engaged in trade and services, as well as agriculture, fishing and mining. There is no room for increase of economic base. Population is largely poor. The real unemployment is estimated to 70%, although the official rate is below 4%, since people do not enjoy any benefits and do not register as unemployed. The processing industry is almost non-existent. Sierra Leone is powered by one hydroelectric plant, which does not even meet the needs of the Capital City. Freetown is additionally supplied with electricity from a ship anchored in the port, so that the water may cool down diesel generators, and the price of electricity is higher than in Europe.

Absurd or not, the country has been and remains a hostage of its natural resources: favorable climate, fertile land and, especially, mineral resources. The people who live in it do not benefit much from all this. The eleven-year civil war in Sierra Leone was not, even nominally, the result of religious and national turmoil, but a consequence of the efforts of one political group to take power and control over natural resources by force from neo-colonialists and puppet government in their function. In addition to numerous civilian casualties, unimaginable war crimes, and even the use of children as a means of war-waging, this conflict has further annulled the development opportunities of this part of the world. The war ended in 2002 with the intervention of a foreign, mostly Nigerian military force, with the permission of the UN, which managed to quell the rebellion and nominally establish democracy and order, but also to restore the old, long-established neo-colonial heritage, which may be more alive today than ever.

I share with Bockarie the thought that many things about the war story in Sierra Leone actually remind me of the conflict in my country. He tells me how he followed the events in the Balkans with great interest in the 1990s and how it is not clear to him what happened there. For a moment I wanted to start explaining and then realized that I can’t tell him anything significant, because things aren’t really much clearer to me either. I refrain from saying that it seems to me that the background of both wars was actually the same, and that is the control of capital over the resources of both areas. I am ashamed to loudly conclude that his countrymen, although harsher in methods, were actually more sincere in their intentions, while the essence of the nominally national, religious and territorial war waged in my country has remained hidden to this very day. 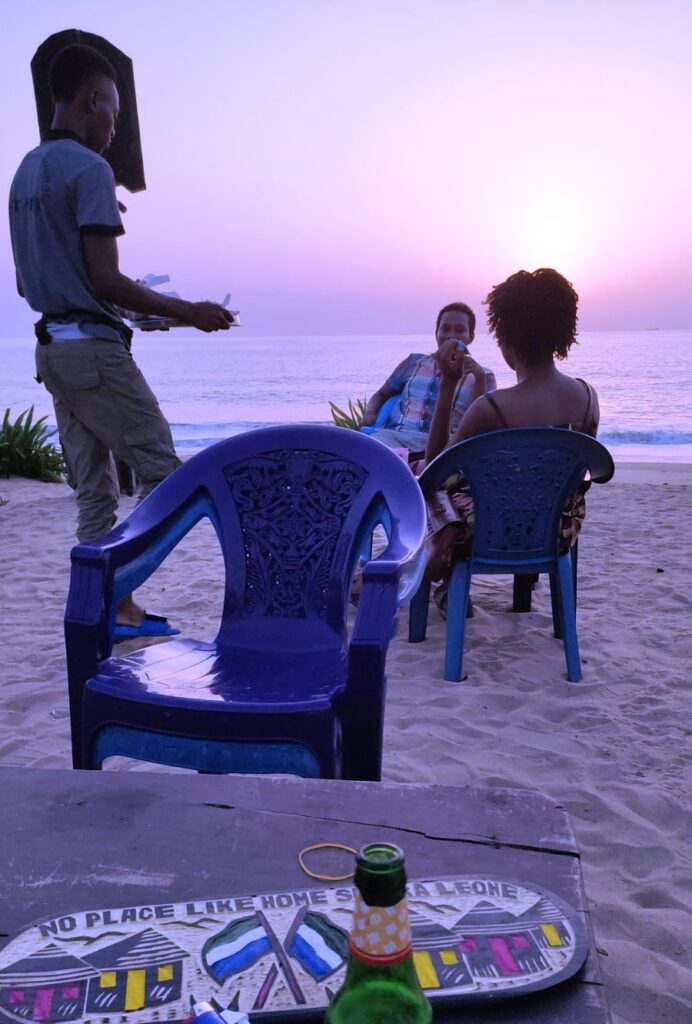 We order another drink. Bockarie stays with his original choice, and I, according to the good old custom, want to try a local one. After a long wait, the waitress brings us a new round – Guinness for Bockarie and a homemade beer called Star, for me. The two of them exchange a few sentences, which I find difficult to understand, and conclude that they are relatives, because they originate from the same tribe. The reason for the whole courteous talk with Bockarie is actually me. The waitress then addresses me and immediately realizes that I am not a local Lebanese. This fact abruptly raises her interest in a new and unusual guest and soon, both jokingly and in reality, she offers me classes from Pidgin English. I thank her kindly. I don’t think I will have time for something like this on this occasion.

A view from the bar

As we talked, I noticed that the day has slowly turned into night. I indulged in the pleasant warmth of the sea breeze, the sounds of the waves and the taste of locally-brewed beer, which, by the way, could have been better. In my mind, I read through a lot of information obtained during today’s meetings, which should have additionally acquainted me with this unusual Country and better prepared me for the work I came to do. It is now clearer to me how different world Africa is. Here, it’s difficult to cling to anything solid and stable. It’s hard to look and see beyond tomorrow. I already know that the development concepts and approaches that I have previously applied in some other places will have to be properly re-examined here. I will think about it. We get up and go to Ginny who fell asleep in the Land Cruiser. The first day of my African adventure is over.

3 thoughts on “Stories from Africa, the Lion Mountain IV”